In the past few days, I’m guessing millions of people around the world have thought about the ways they’ve been impacted by author and speaker Wayne Dyer, who passed on over the weekend at the age of 75.

Starting with the book Your Erroneous Zones in 1976, he became a legendary figure in spirituality and new thought, introducing words like “consciousness” and “manifestation” into our everyday lives.

At our house, our bookshelves may have more books by Wayne Dyer than any other single author. But it was his book Manifest Your Destiny that made the greatest impact on my husband Bob and me.

It was 2001, Bob and I were engaged, and we were searching for a house in the country. We’d been reading Manifest Your Destiny out loud to one another when we drove around the countryside, and we took Dr. Dyer’s advice to heart when he instructed us to write down everything we wanted as part of the manifestation process.

It took four pages, but we made a complete list of what we were looking for in a house. At the top of Bob’s list was plenty of space for his tools. I wanted a view with a pond and lots of trees.

Many of our “most wanted” items were compatible—an ample kitchen, guest rooms for friends and family, office space for both of our businesses.

But there was one sticking point. Bob wanted a new house. I wanted an older one. We weren’t sure how that gap would be bridged, but we took Wayne Dyer’s word for it and kept looking on faith. 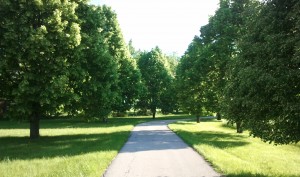 Three weeks into our search, we were driving down the highway with the clipping of a classified ad in hand. As we searched for that address, we spotted another For Sale sign by the side of the road, and we spontaneously turned into the drive to take a look.

The driveway was lined with linden trees, and the rolling hills behind the house came into view as we drew closer.

The owner was sitting on the front porch swing with one of her children. When we asked if we could take a quick look, she said sure. “We just got home from church and the place is a mess, but you’re welcome to come on in.”

The trees and the view already looked promising, but when we stepped through the front door and saw a massive stone fireplace that looked like something out of a lodge, I felt chills up and down my arms.

A large garage with a workbench would easily accommodate Bob’s tools. The walkout basement would give both of us office space. And the kitchen overlooked a backyard filled with trees and, off in the distance, the neighbor’s pond.

I was still tingling when we asked the owner a question that we knew could be a deal-breaker: “How old is this house?”

His answer rang out like a direct message from Wayne Dyer himself:

Ding, ding, ding. We had a winner.

The center portion of the house, he explained, was built in 1910 and was moved to its current site in the 1970s, when the owners added on. Other updates reinforced its  “old and new” status.

It was exactly what we wanted—something we weren’t sure even existed. And over the past 14 years, it has served us better than we could ever have expected, becoming a favorite spot for everything from annual Easter egg hunts and family card games to study groups and writing retreats. Without Wayne Dyer’s book, who knows where we’d be?

This is what great teachers do. They inspire us to put our faith in more than we think possible. As Dyer once said, “If you believe it will work out, you’ll see opportunities. If you believe it won’t, you will see obstacles.”

Thank you, Dr. Dyer, for helping us see the opportunities in our lives. You will be greatly missed in physical form, but your messages will live on in our hearts—and our old-and-new home—for years to come.