It’s time for the launch—let’s do this together

This week, The Only Little Prayer You Need: The Shortest Route to a Life of Joy, Abundance and Peace of Mind will be officially released to the world. Like a lot of authors, I feel like I’ve given birth. And like many parents, I feel this creation has a little to do with me, and a whole lot to do with a power I can’t exactly explain. 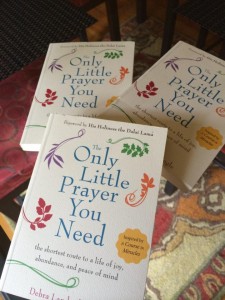 A friend texted me a photo of her pre-ordered books when they arrived. Aren’t they beautiful?

In other words…I’m extremely proud of this book—and also extremely grateful that I got to be the one who gave it life.

From the beginning, The Only Little Prayer You Need has been a work of divine inspiration. It started, as the first two chapters explain, on a day when I was overwhelmed by mundane life events that added up to a mud pit of frustration, and what I can only call stuckness.

Now, a little more than a year and a half later, it’s being released into the world with a foreword by the Dalai Lama, an endorsement by Archbishop Emeritus Desmond Tutu, great reviews and a lot of anticipation.

It just goes to show you what a bad day can do.

That’s why I can’t take full credit for it. If it had been up to me, I probably would have stewed in that mud pit for a lot longer than I did. But when the prayer showed up, things began to change.

Something/someone much wiser and more powerful than me wanted the message of this book to get out to the world, and I just happened to say yes to the assignment. At every stage, the process has slowed down when I’ve gotten in the way. And it has sailed like a boat in the wind when I’ve stepped aside and simply said “Yes.”

That’s why I SO believe in the core message of the book: The only thing standing in the way of peace in our lives—and in our world—is fear. And we’ve been thinking we can fix that fear when, honestly, we need a lot of help.

It sounds simple, and it is. Yet it’s also complex because we believe we’re complex beings. And that’s what this book, in its very straightforward way, sorts out.

If you’d like to help turn this book from a message into a movement, you can help in many ways:

Spreading the message of this book is a little like a political campaign, except without any attack, defensiveness or backstabbing.

It’s more like sharing a cup of tea or a deep conversation or your favorite piece of music—something that comes straight from your heart to the heart of another, intended to do nothing but heal, soothe and comfort.

If there’s one thing we all need in our lives—and in the world—it’s less fear and more love. I believe this book can help not just in a little way, but in a big, magnificent, unbelievable way. I hope you’ll feel the Spirit of this book and help me carry it as far as it will go, which I’m pretty sure is a lot farther than any of us can imagine.

Thank you for reading, for sharing your stories, and for being part of the message!